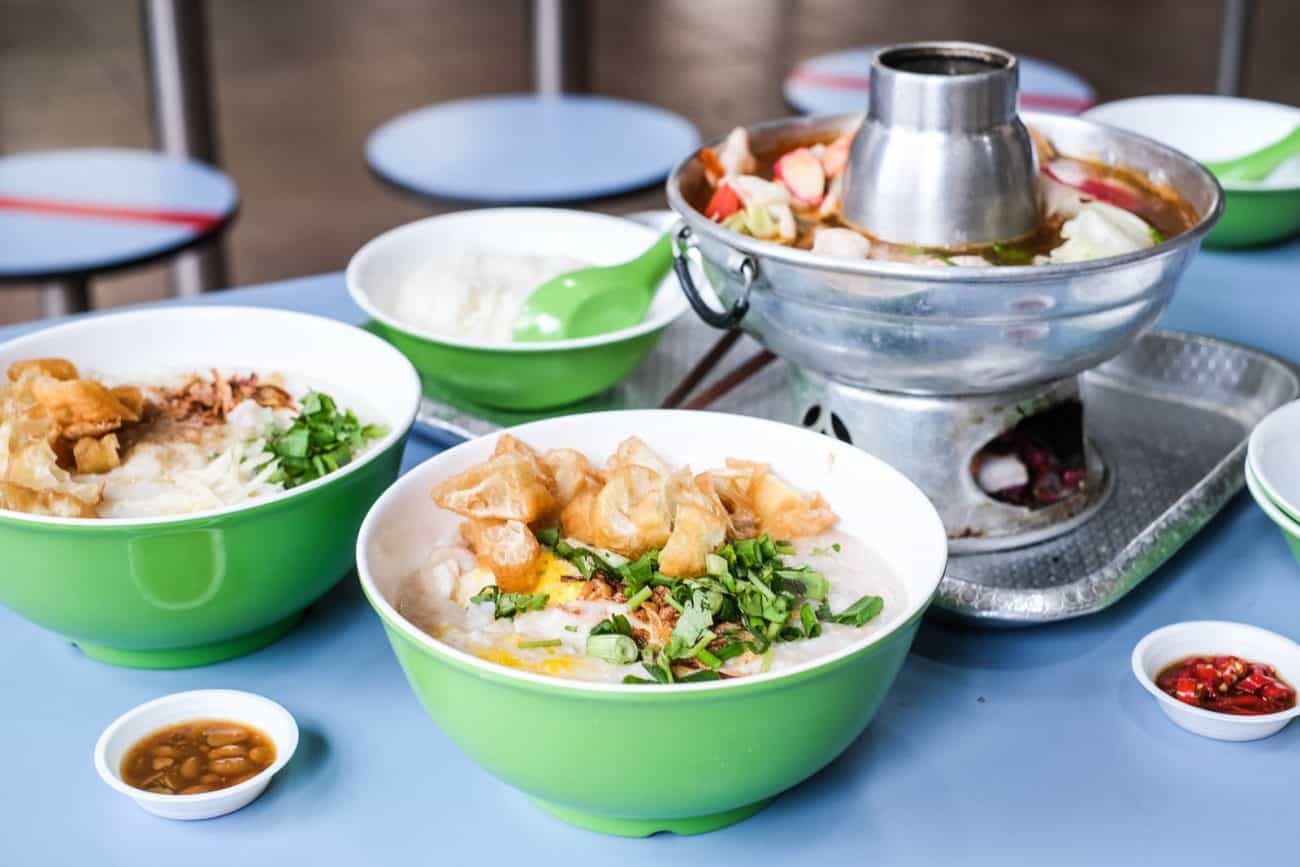 During lunch time, it’s like fighting a war to get to Madam Wong. The queue never ends. Although every bowl of porridge is packed with ingredients, Madam Wong shared that some customers still request to add more ingredients. Fighting the lunch hour war is not a mean feat for Madam Wong, as she’s extremely efficient. 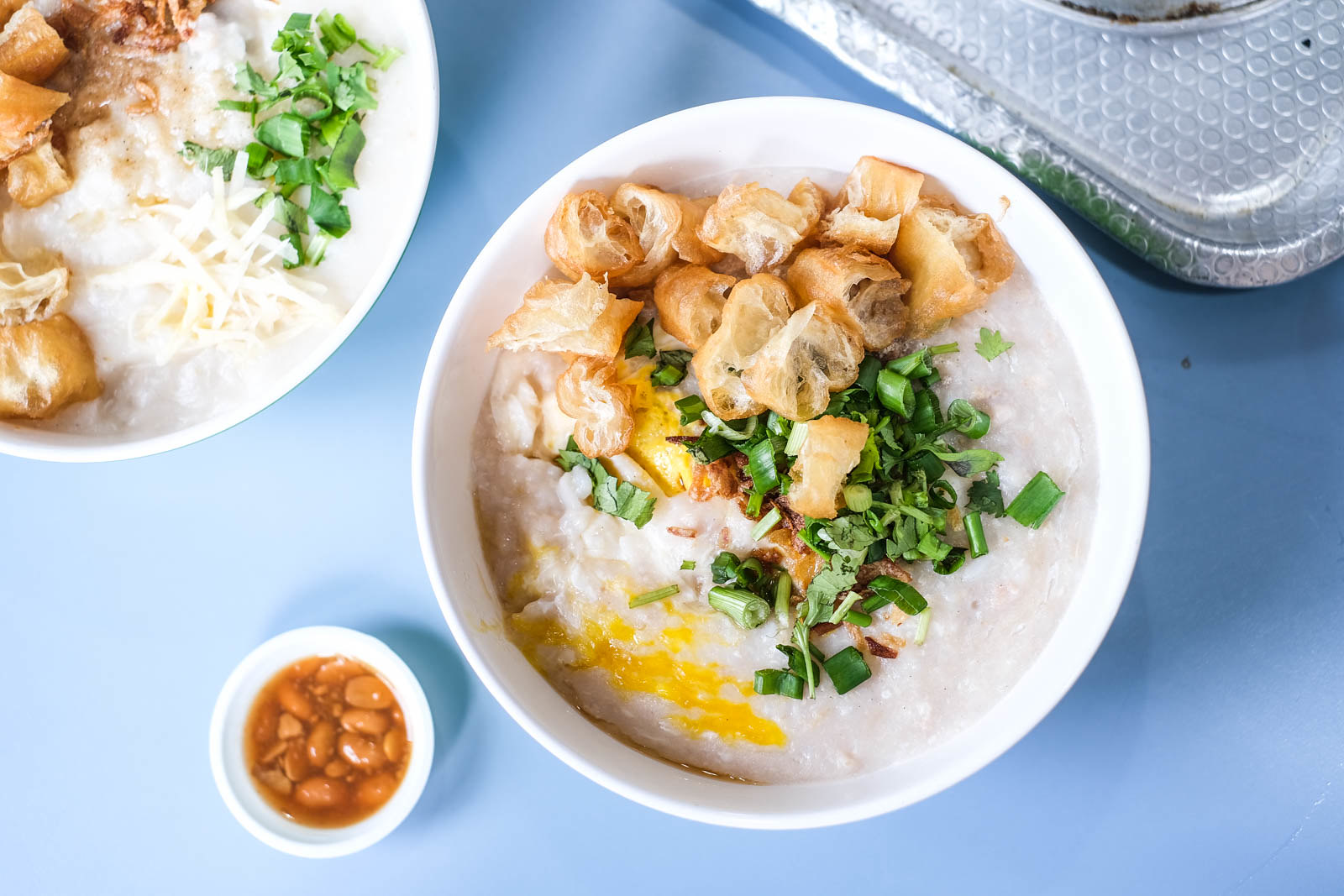 Madam Wong, who learnt how to cook porridge from her parents since young, loves porridge. She likes having more porridge than ingredients in her bowl, so she gets to savour the porridge more than anything else. The name of her current stall “新港粥品” means Singapore and Hong Kong-style porridge, and that’s exactly what she serves,

22 Halal Eateries You Can Dabao From To Satisfy Your Cravings This Ramadan! 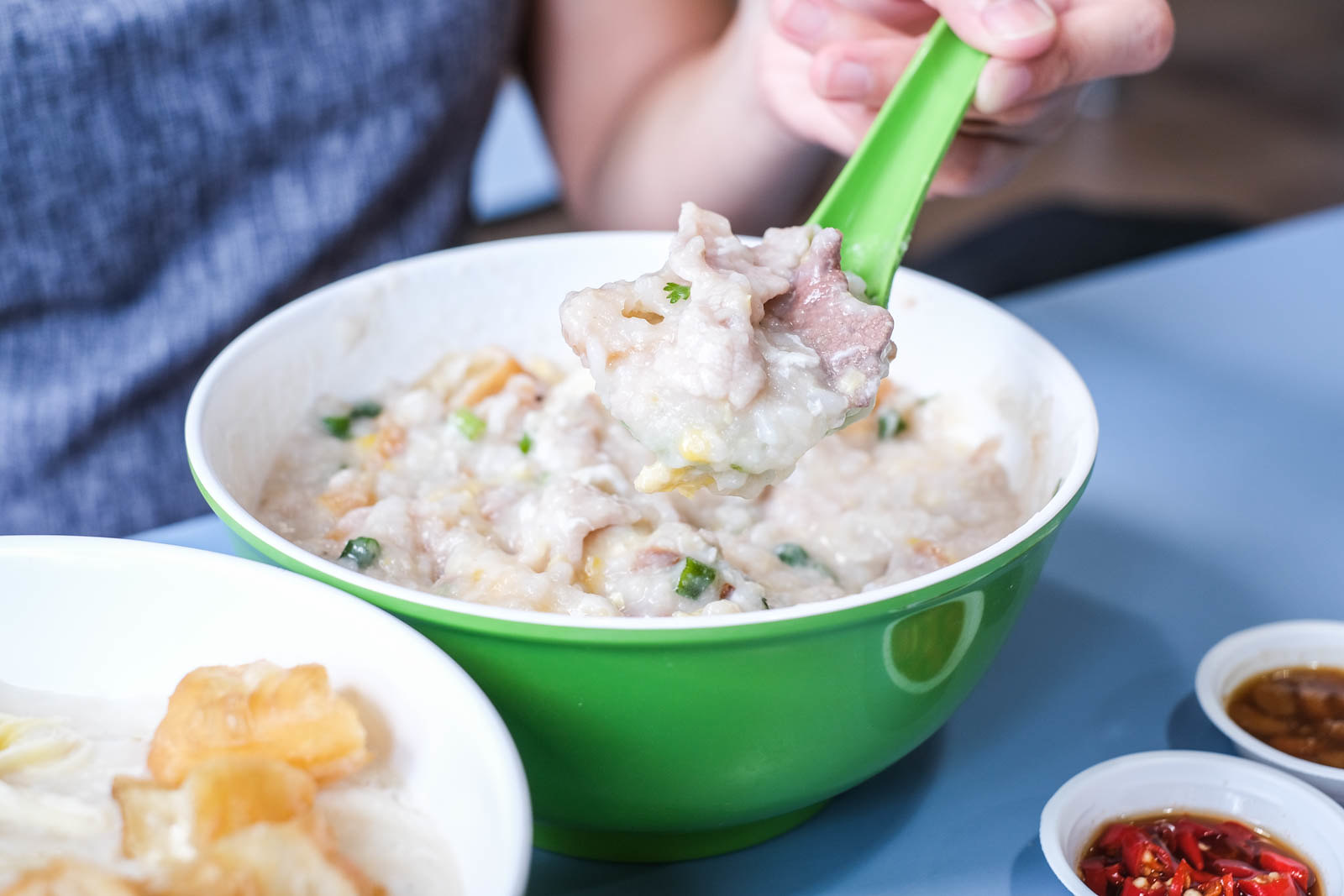 When asked which dishes are her signatures, Mdm Wong revealed that the mixed organs porridge is one of them. Smooth and thick, the porridge was filled with pig liver, pork slices and small intestines. I liked that the small intestines were really clean and not too chewy. The liver was smooth and well-cooked too! 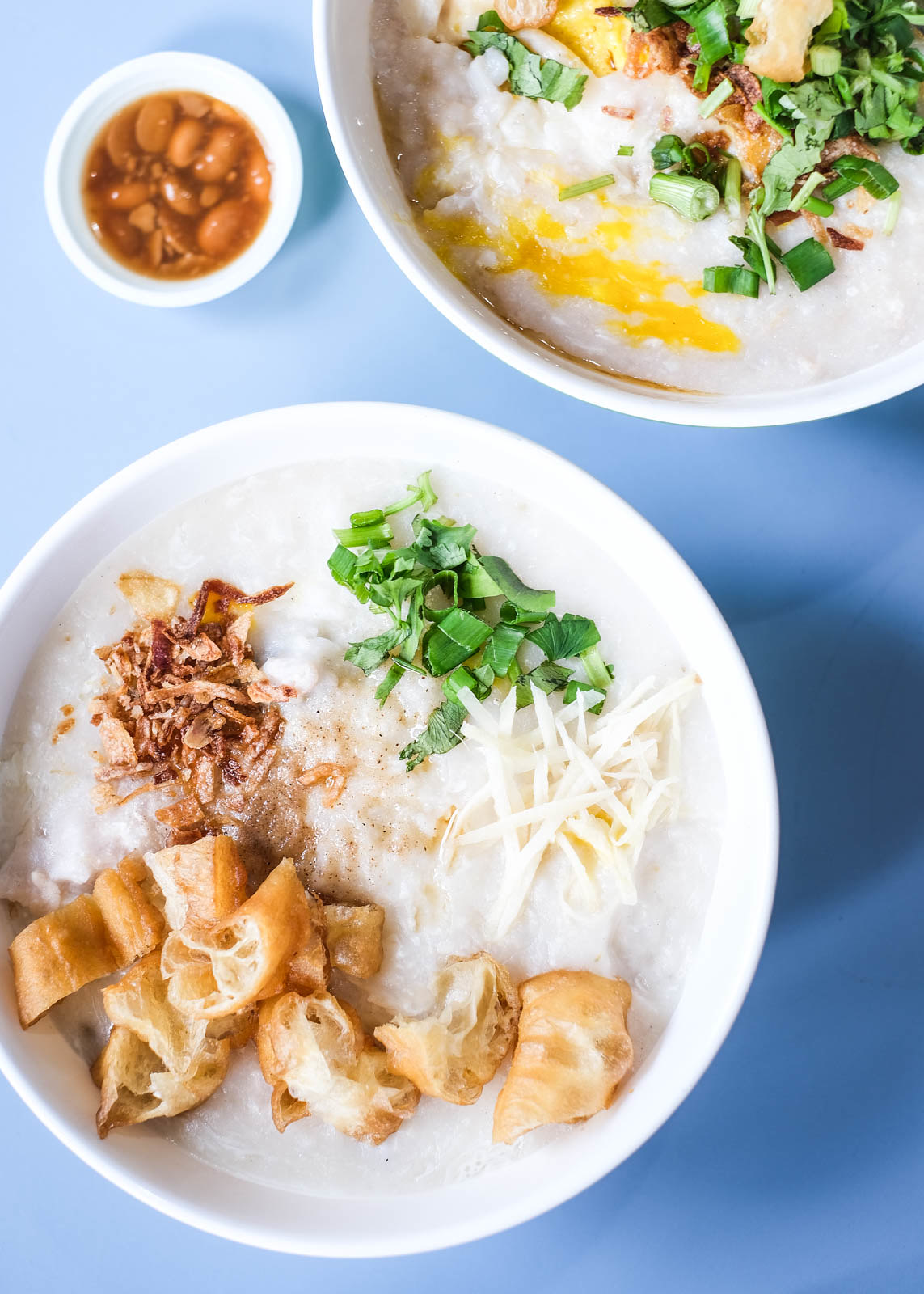 Another signature is the classic Century Egg and Pork Porridge. The taste of this bowl of porridge was distinctively different from the previous bowl. This was less meaty, and had a lingering ginger flavour. Did I mention that each bowl of porridge comes with youtiao (fried dough)? 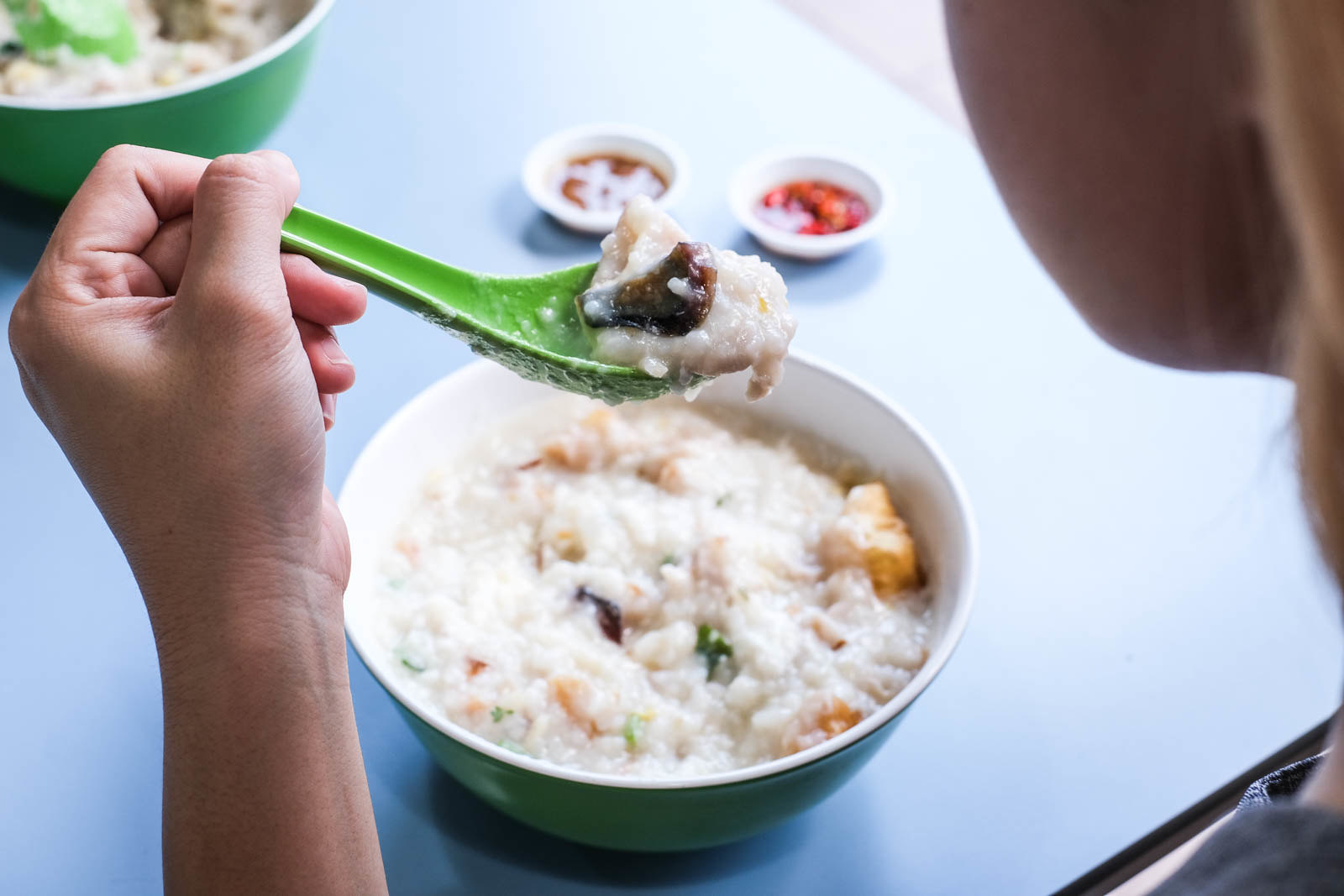 Madam Wong shared a tip with us on how to eat thick porridge. First, you shouldn’t stir much after mixing the condiments and ingredients well. Start scooping gently on the surface from the right to left. The porridge on the surface is usually cooler and easier to eat. By not stirring continuously, it prevents the porridge from producing more liquid, keeping the porridge thick and smooth. Didn’t know there’re so much to learn about eating porridge, did you?

10 Places You Can Get Your Breads & Pastries During Circuit Breaker 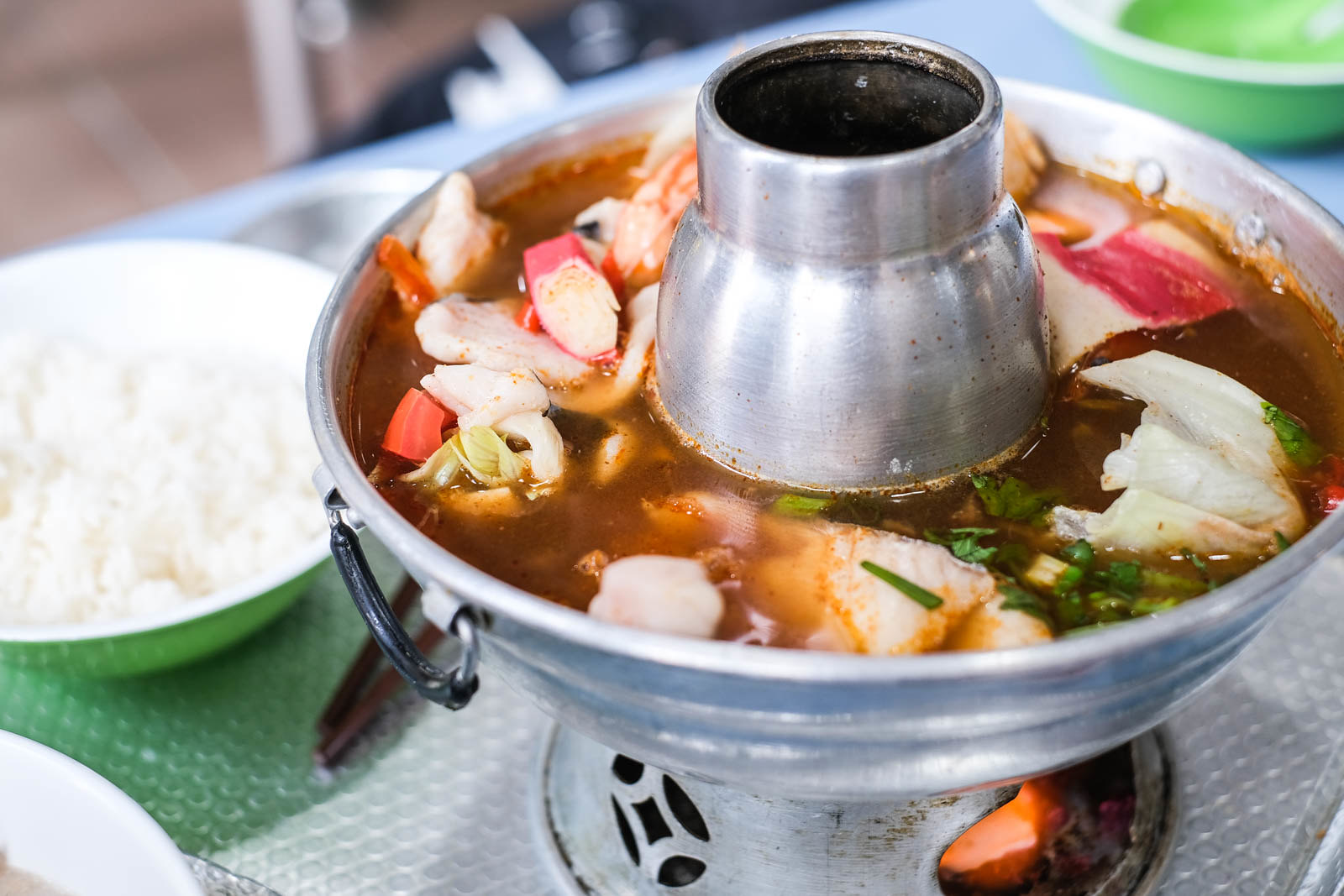 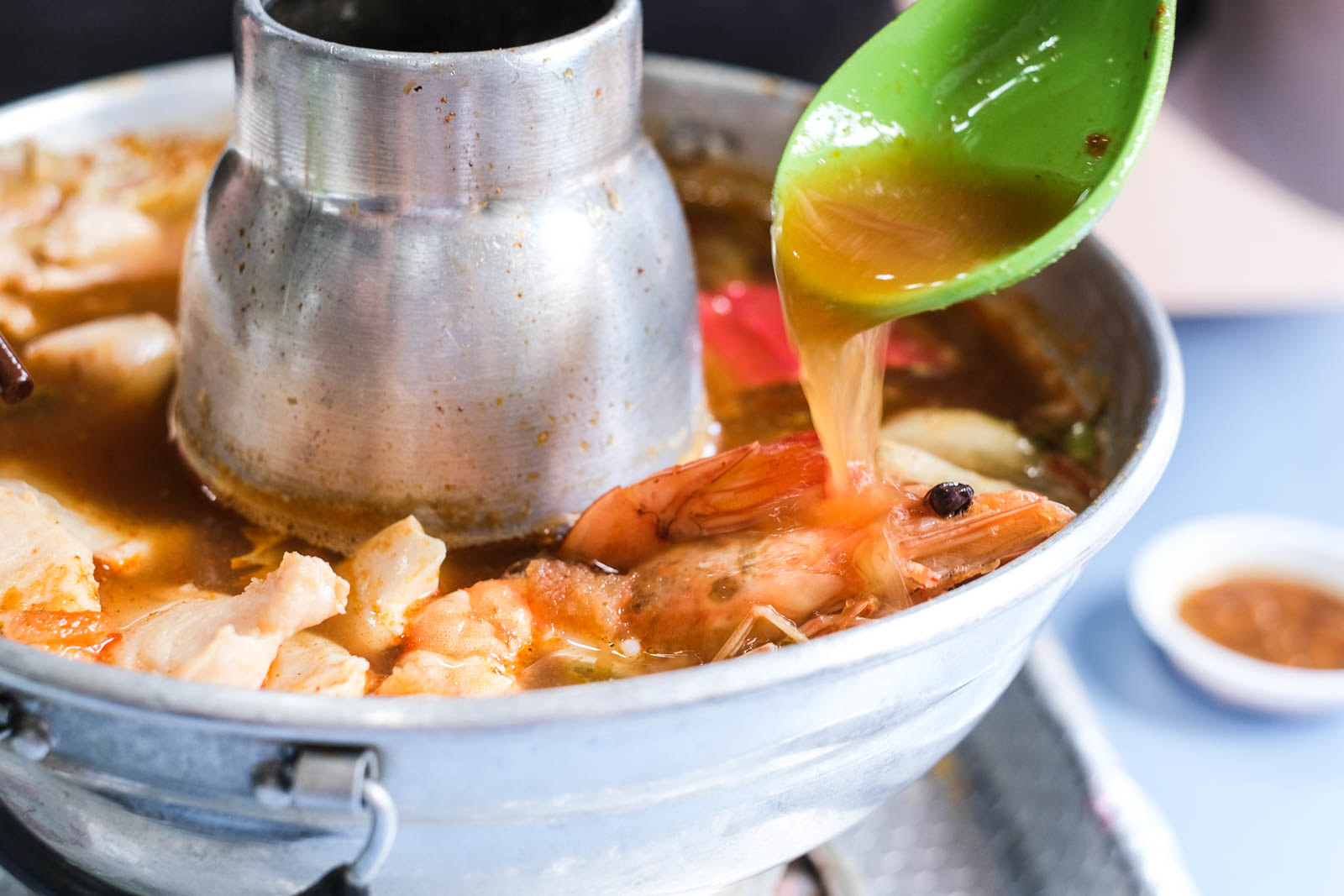 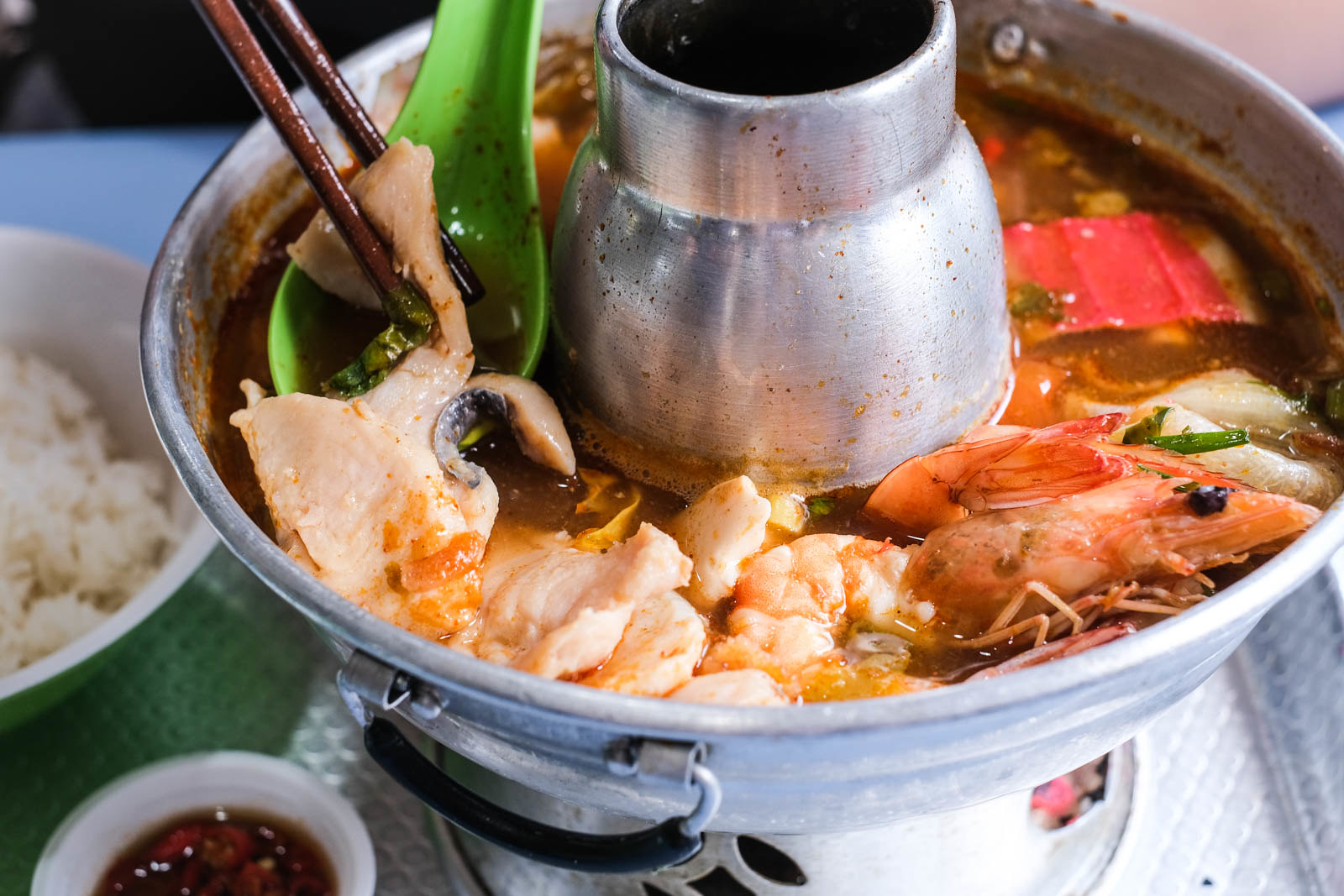 Apparently, many female customers tend to order the Tom Yum Seafood Hotpot during lunchtime. Although the tom yum seasoning is from a supplier, Madam Wong tweaks the flavour of it according to her own recipe. Turns out, it was really sweet, a little too overwhelming for me, though there was a hint of tanginess. Similar to the porridge, the portion of the ingredients was generous. For an individual pot, this was extremely filling. 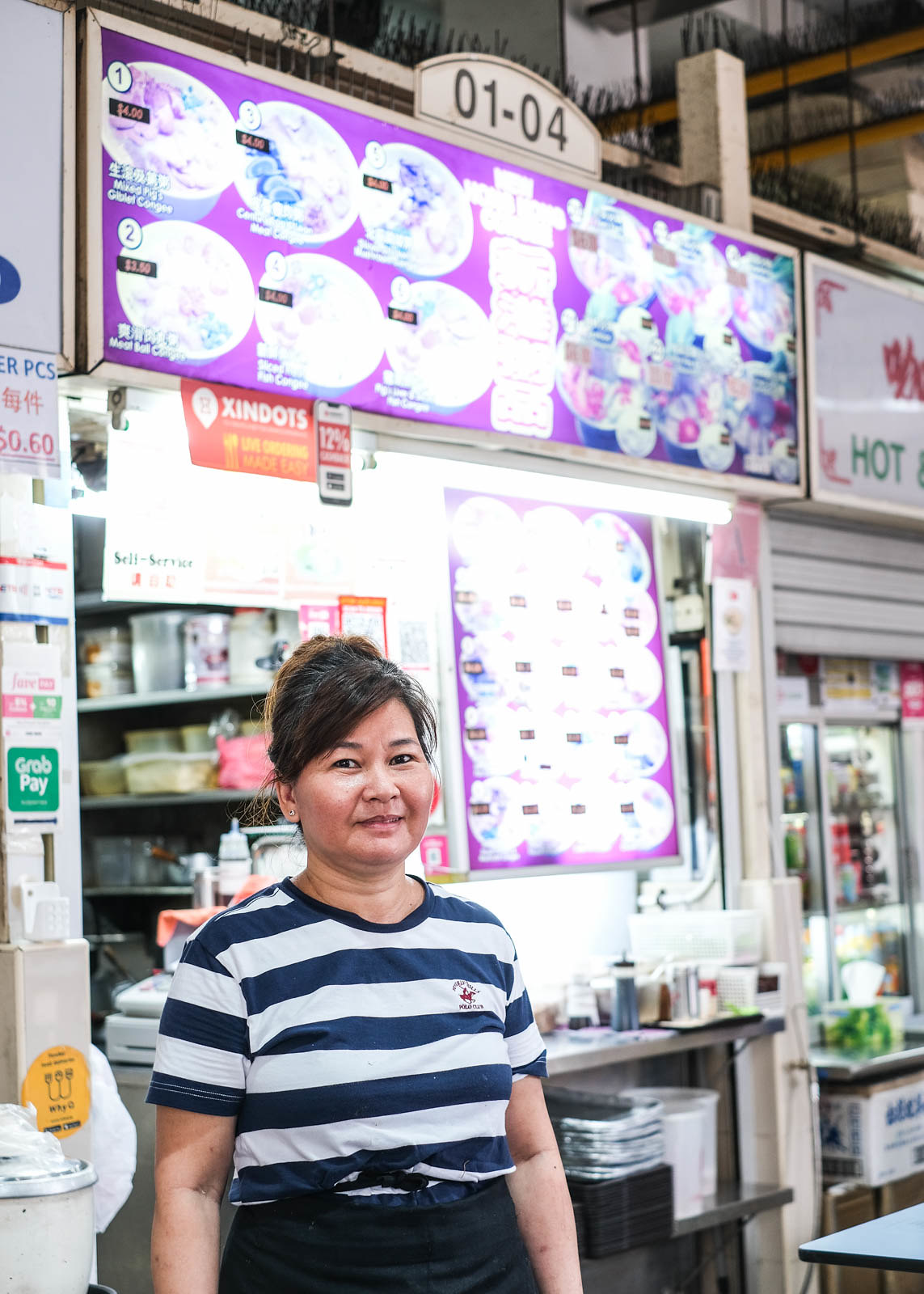 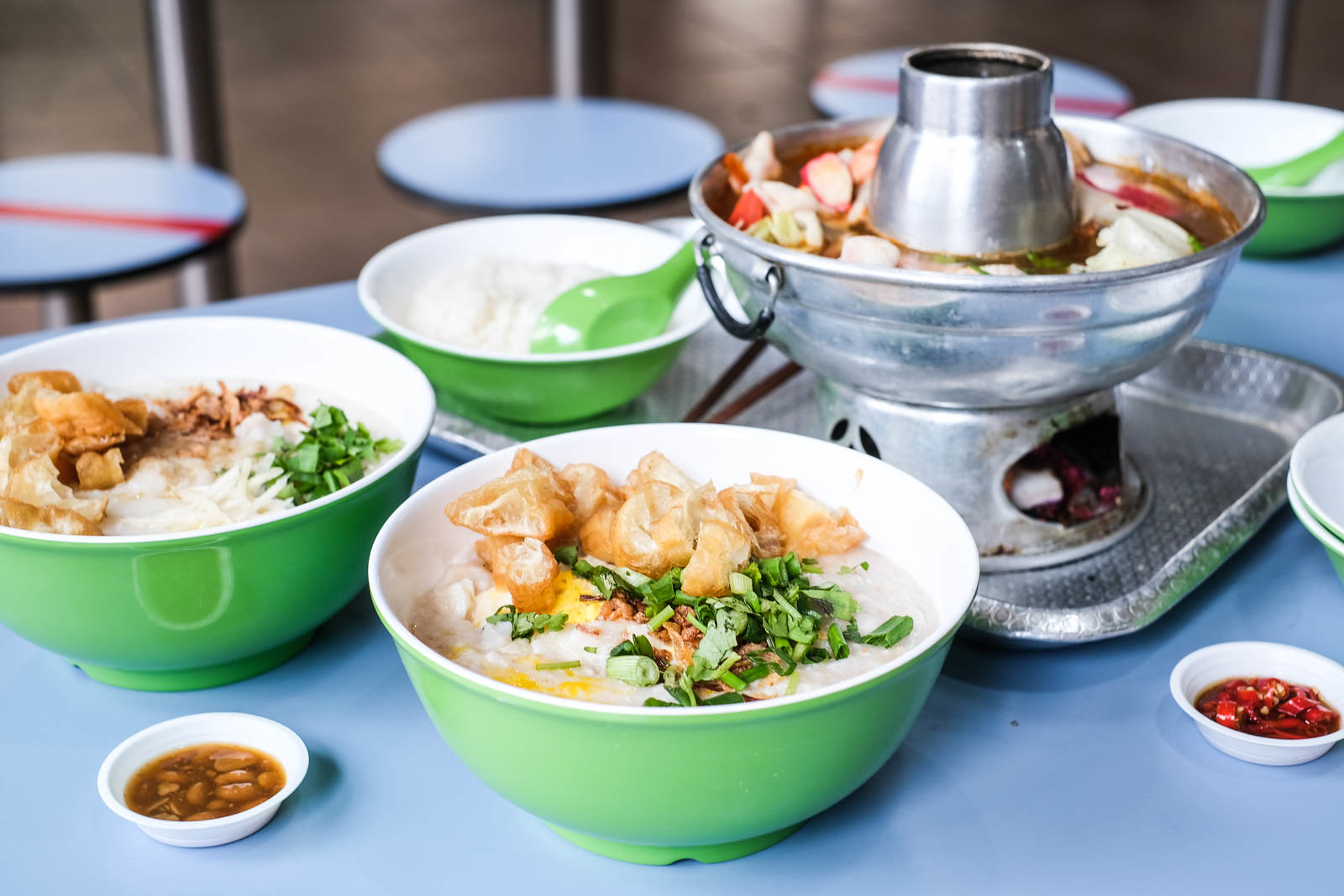 Say hi to the motherly Madam Wong the next time you head to Amoy Street Food Centre for a comforting bowl of porridge!

MissTamChiak.com made anonymous visit and paid its own meal at the stall featured here.

Let’s build a food community that helps to update the food news in Singapore! Simply comment below if there’s any changes or additional info to NEW HONG KONG CONGEE. We will verify and update from our side. Thanks in advance!

Cooking for those she loves is therapy; eating is purely her gluttony. Maisie gains the most satisfaction from sharing cheap and good food! Her dream is to eat and travel without having to look at the price.

[ad_2]
Travellers Cantik Indonesia, find another review about travelling to Singapore in our website.

ABOUT US
Newspaper is your news, entertainment, music fashion website. We provide you with the latest breaking news and videos straight from the entertainment industry.
Contact us: contact@yoursite.com
FOLLOW US
© Newspaper WordPress Theme by TagDiv
MORE STORIES
Singapura