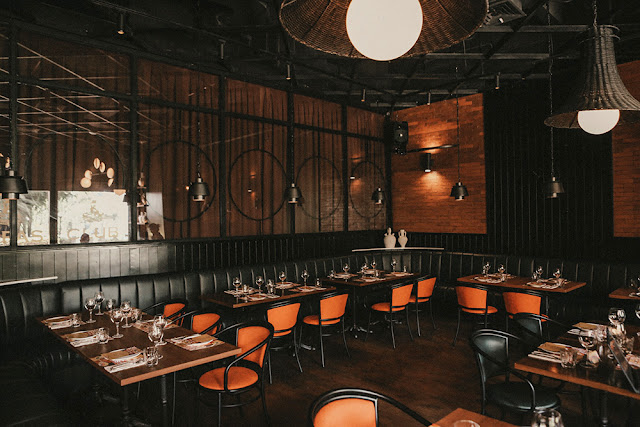 I don’t think there are a lot of Spanish restaurants in Jakarta and to narrow it down even more: good Spanish restaurants in Jakarta! Plan B, Javanegra & Por Que No are some of the good ones that pop in my head if you spontaneously bring the topic, anyway recently I was invited to have lunch at this restaurant that I’ve been wanting to go but haven’t got the chance (and now finally did!) called Tapas Club, this franchise is originated from Singapore (and they also have one in Malaysia) and their Jakarta branch is located at Setiabudi One precisely next to St. Ali!

PS: you know the drill, just because I got invited to the event doesn’t mean that I would give positive reviews, review is always going to be based on my personal experience, and honest.

Let’s start with the gorgeous interior, I love it! It’s classy while still keeping it homey and overall simple, the brick wall gave this warm vibe that I love, not sure whether it’s a Spanish restaurant thing or to built the homey vibe, but the red bricks, I mean, just fits the concept so well, and the other details on the leather sofa, the orange seats and all just screams class! 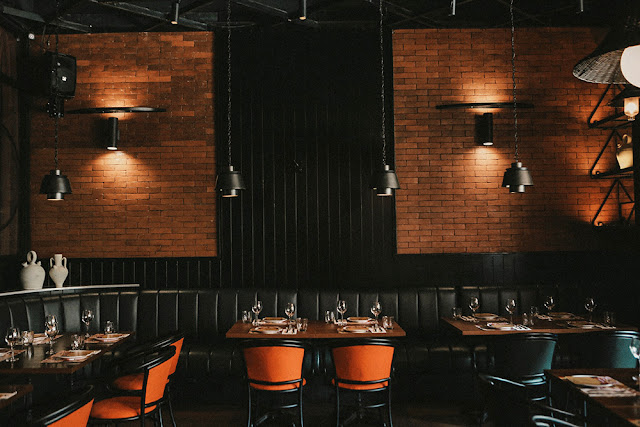 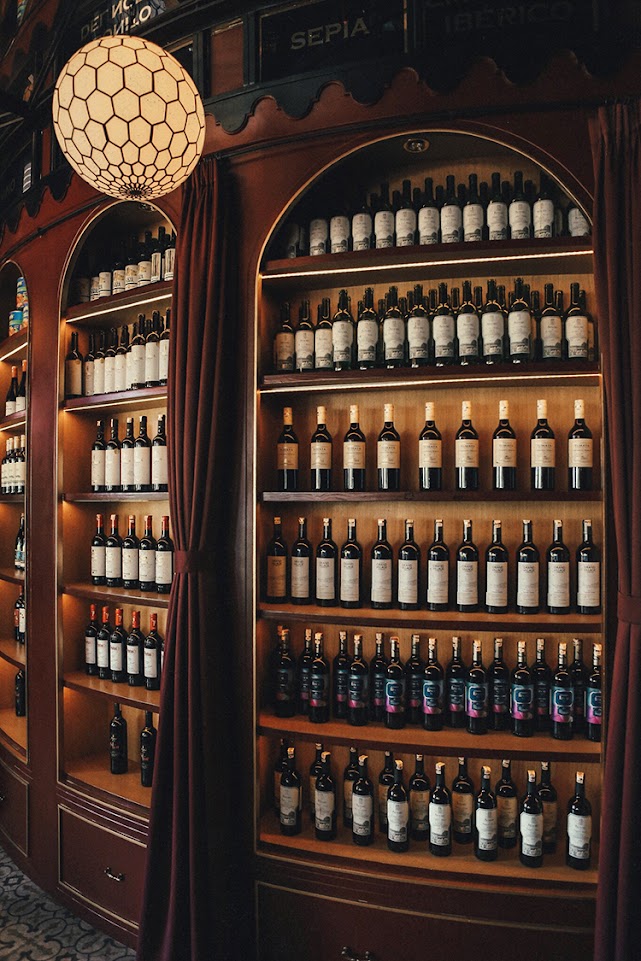 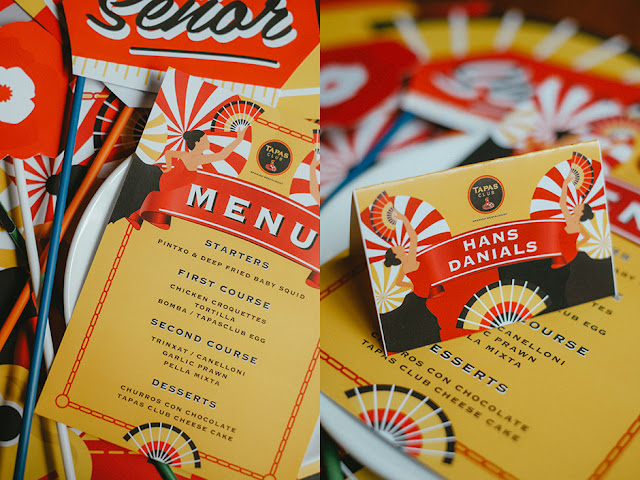 I feel like I need to explain you guys a little bit about Tapas, let’s just put Tapas as the Spanish version of Japanese Izakaya, normally dishes that’s served in small portions and meant to be shared, the key is SHARING and normally people enjoy Tapas with some alcohol: cocktails, wines, Sangria, but if you don’t drink alcohol you can absolutely drink it with whatever you want, no rules, feel free.

OMG when it comes to staple Spanish drink, nothing is more Spanish than Sangria, it’s basically red wine mixed with juice (normally orange juice) with various chopped fruits (apple, orange, berries), it might sound simple to create but to be honest, out of the ones that I’ve tried, the amount of wine and juice just has to be right, but Tapas Club’s is actually pretty good! 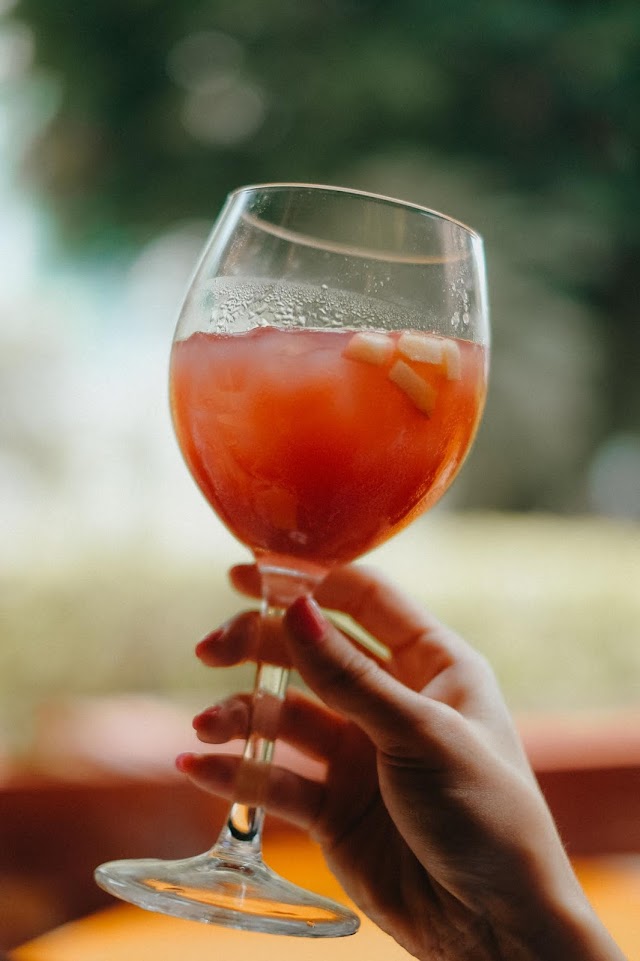 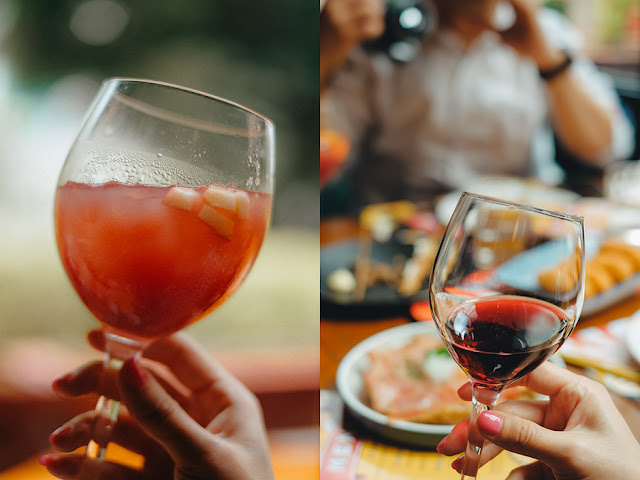 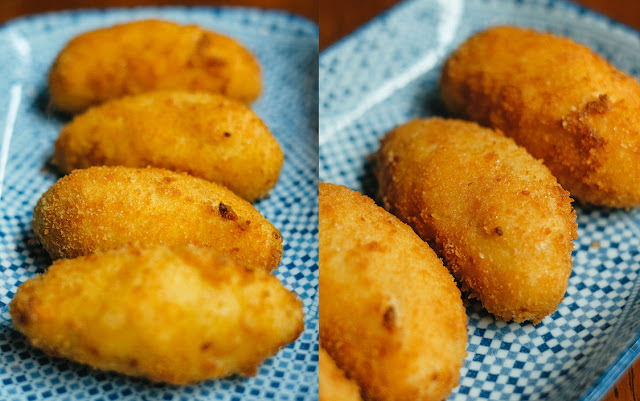 THE MUST ORDER HERE! This one was so good that my table decided to order another portion (well not in a shameless way but after gladly offered by the restaurant’s manager)! Their take of chicken croquette is different compared to others, apparently NO POTATO is involved in the cooking process, they use thick cooking cream and chicken, slowly cooked everything together until they turn pretty solid, shaped and deep fried! I don’t get how the coating can be crunchy or how the shape is maintained when it’s cooked (instead of breaking apart or melt), but anyway this one is MUST ORDER: you got the flavor (properly seasoned for me), the texture and the addiction later!

Creamy but not overly thick for my liking! 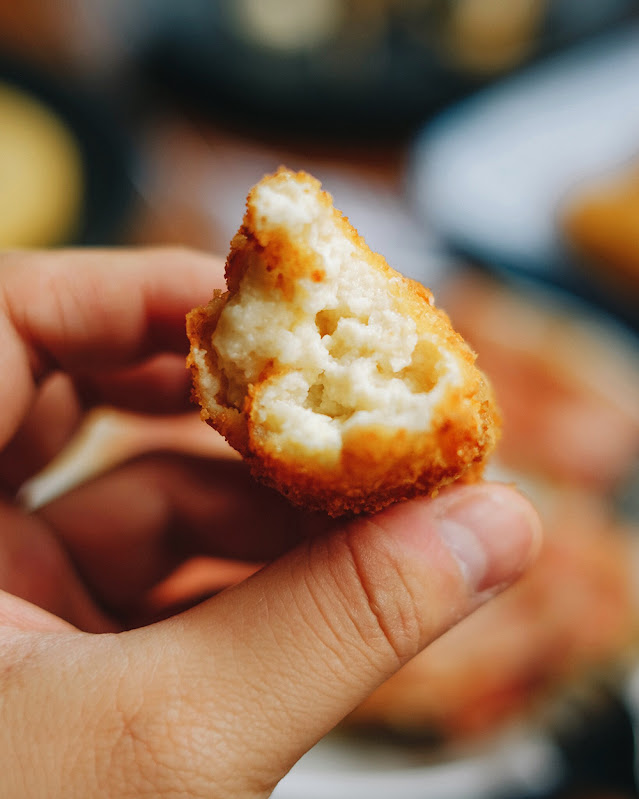 Japanese style omelette with generous potato chunks, it was good but not out of the world good. 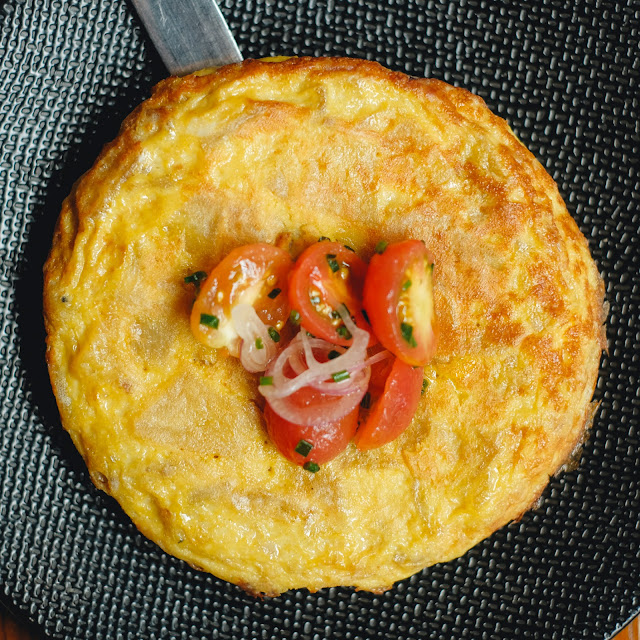 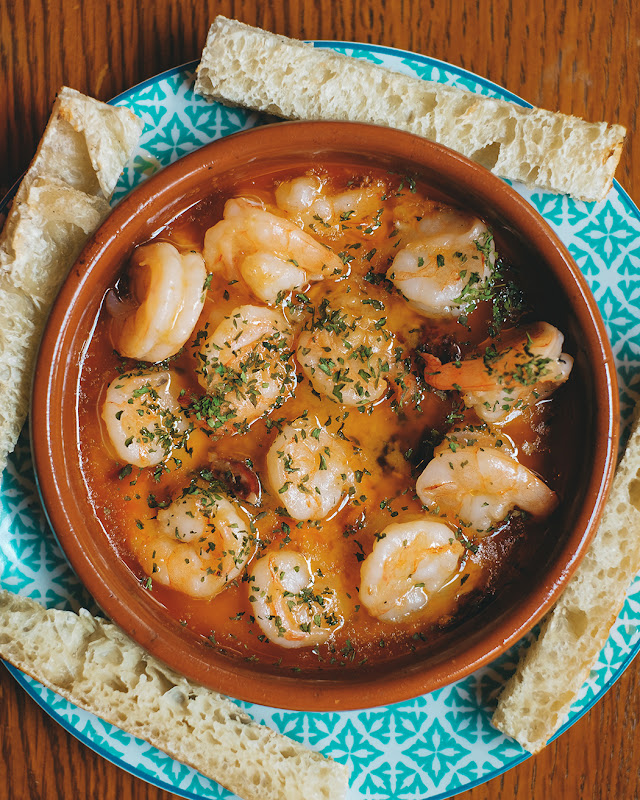 TAKE NOTE, another favorite of mine from the lunch! Another Spanish staple: garlic prawns! Oh my goodness this one’s SUPER GOOD but really it’s all in the prawns, if they’re not fresh in the first place then the dish is failing! The prawns were so fresh that it’s so crunchy and naturally sweet but cooked with garlic, olive oil and seasoned just beautifully that it’s just spot on savory, salty and aromatic, I literally forgot the breads were there (heard supposed to be combined but I didn’t need them! LOL) 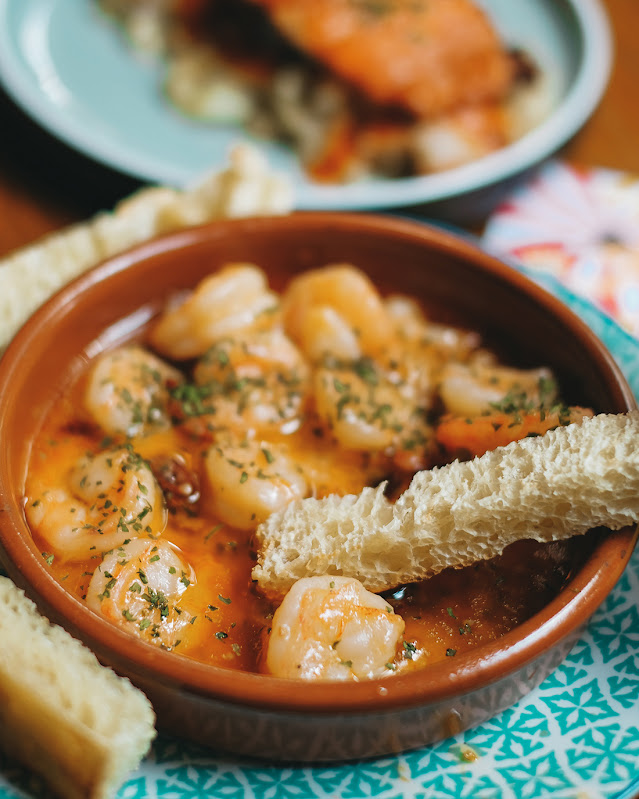 I suppose, how you should eat it? 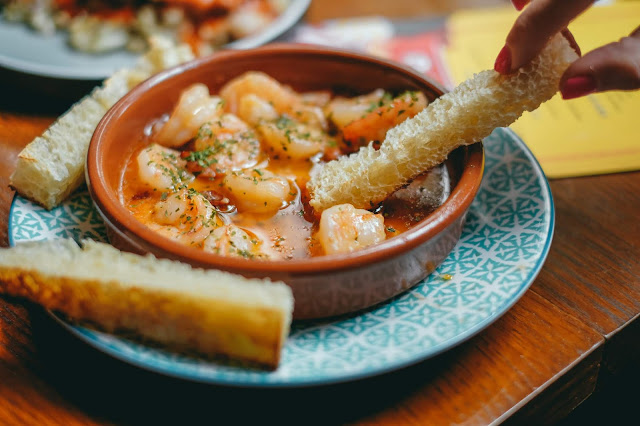 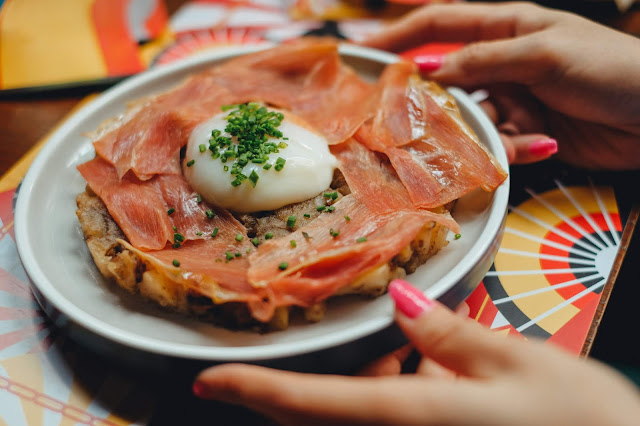 I notice that the lunch that day was pretty heavy on potatoes, which is a good thing ;), anyway this one is delicious, probably another favorite, consist of bed of moist potatoes topped with ham, soft boiled egg and truffle oil dressing! All in the ham baby, so fresh and so good! 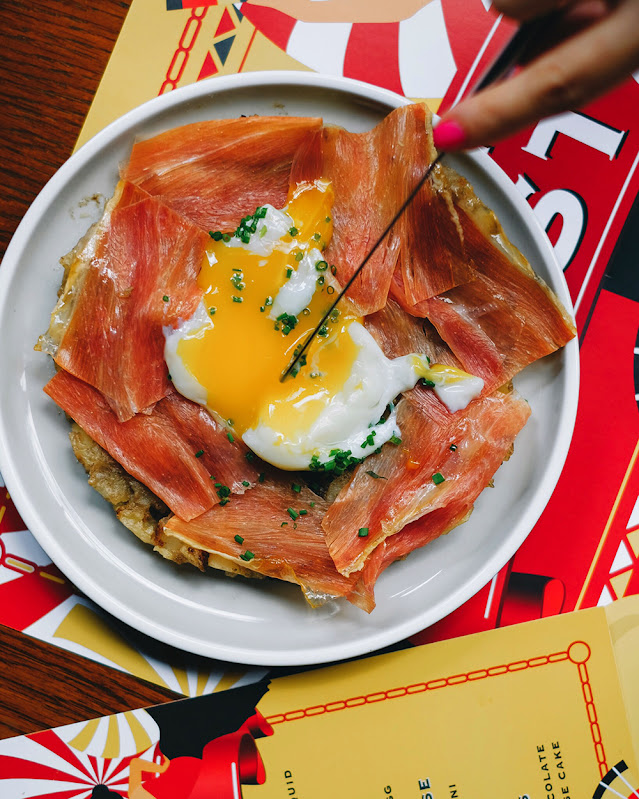 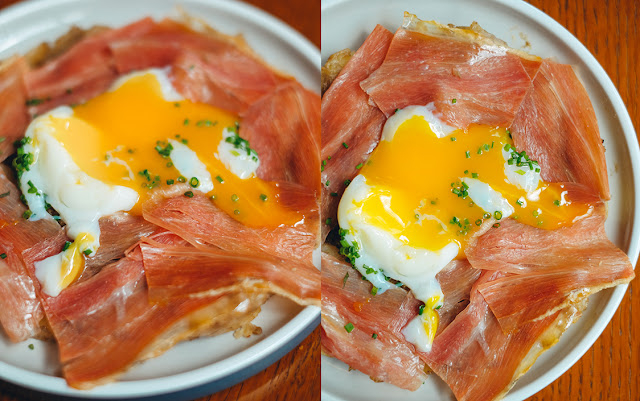 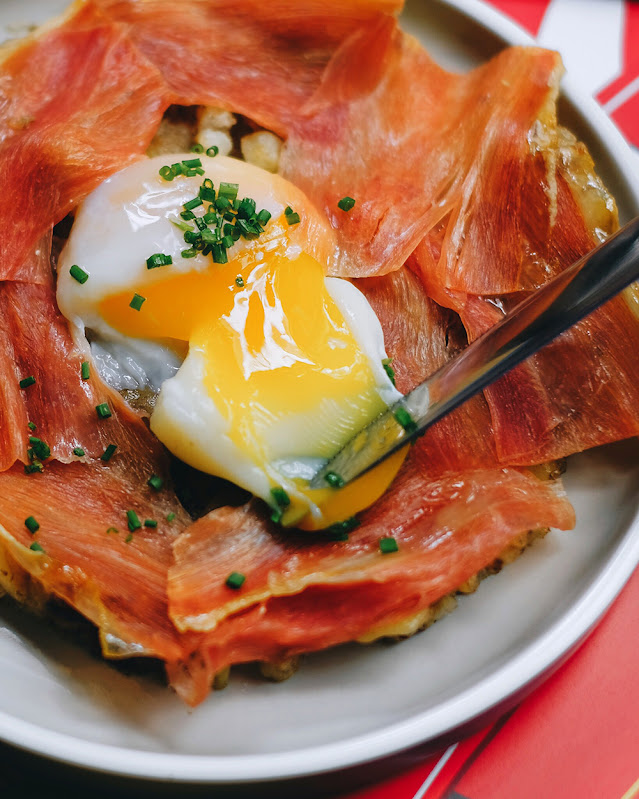 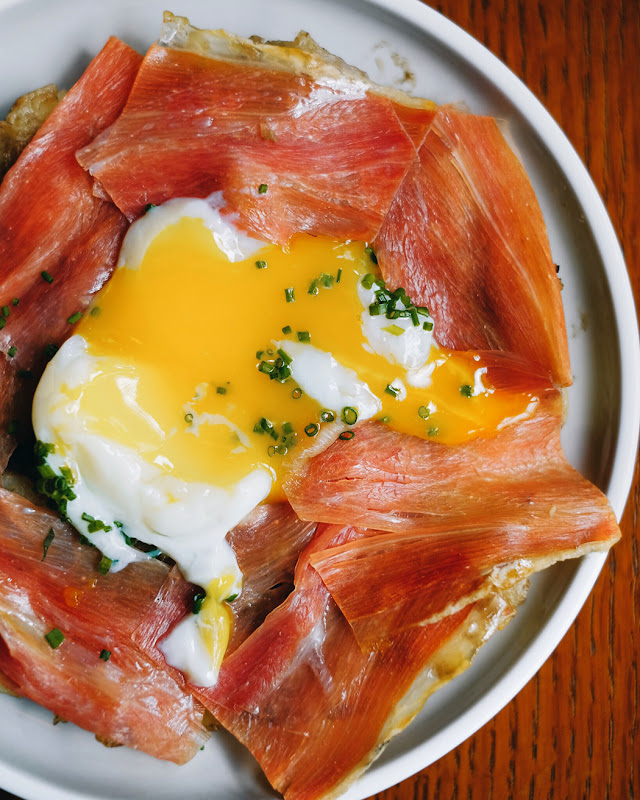 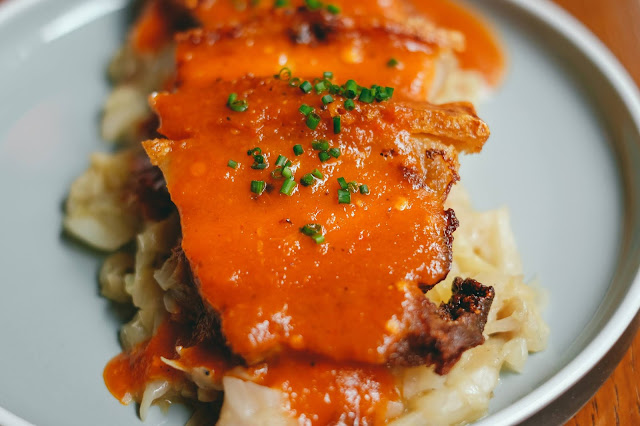 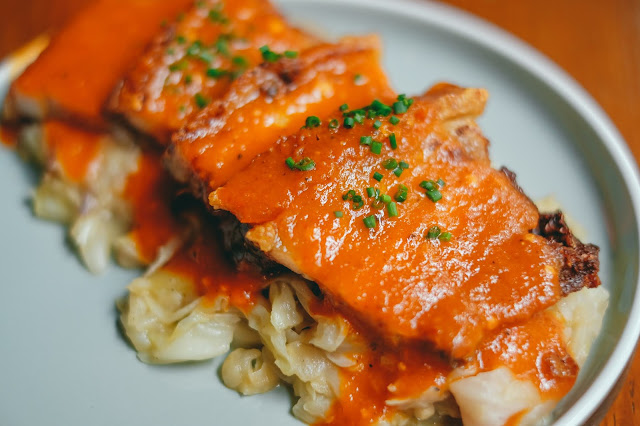 Wanted to like this more but apparently I am not the biggest fan of sour cabbage, but the grilled pork belly was good tho! 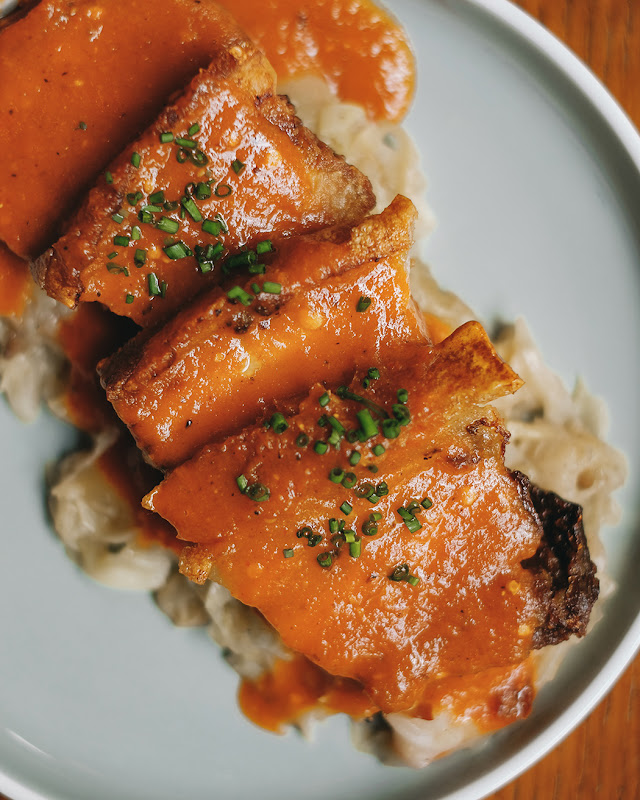 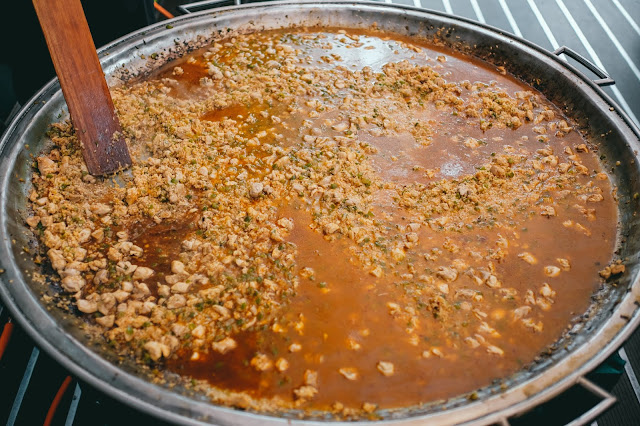 I will put the review on what should be good in a Spanish restaurant: PAELLA! Paella is one of my favorite Spanish food and if it’s done right, my fond level towards a restaurant just raises a few points LOL! The chef showed us the making of the giant paella, a lot enough to feed 50-ish people that were on the event that day! Speaking of Paella, it’s a Spanish rice-dish with various toppings (normally seafood), cooked with stock and seasoned with mainly salt and pepper. 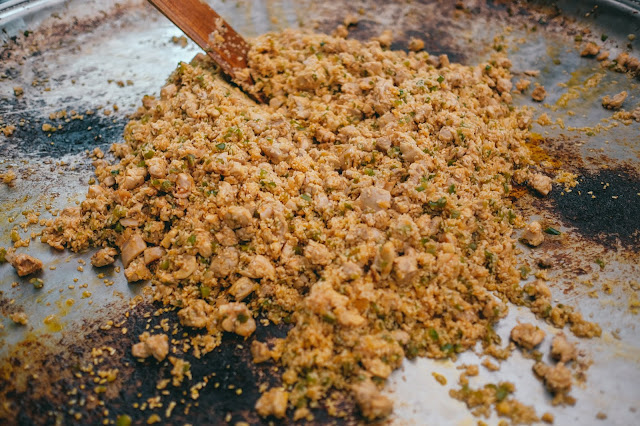 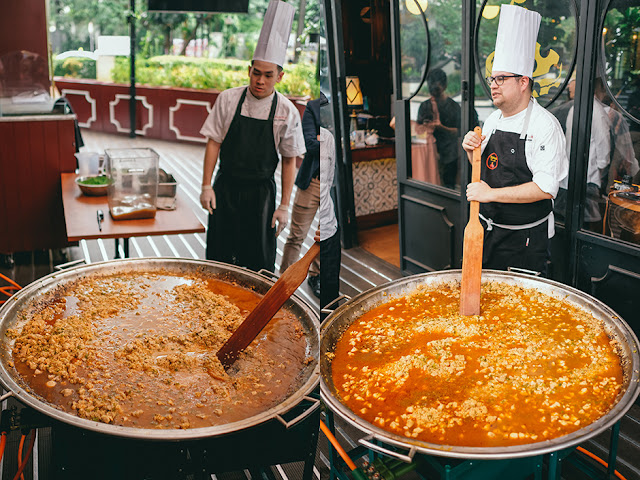 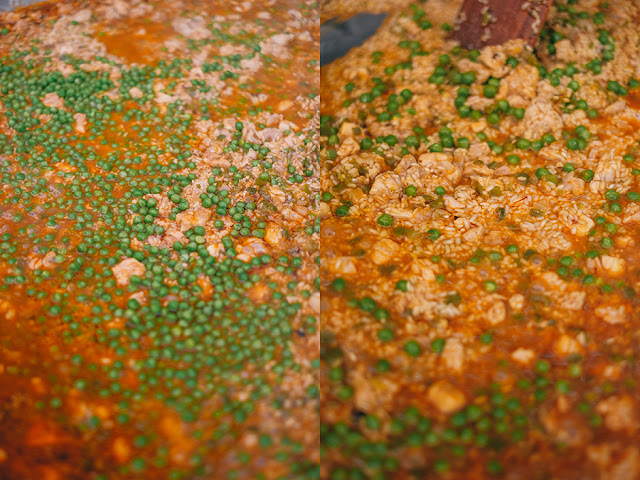 Their version of paella is… I think I am going to use the word “original” because it did taste like the one that I had in Spain, very lightly seasoned, maybe not THAT savory as how you would expect, but they cook it perfectly, the rice was nicely done, seafood’s fresh and if you ask me, and since I appreciate originality and authenticity, I like it!

My concern is that maybe most of you would expect more seasoning. 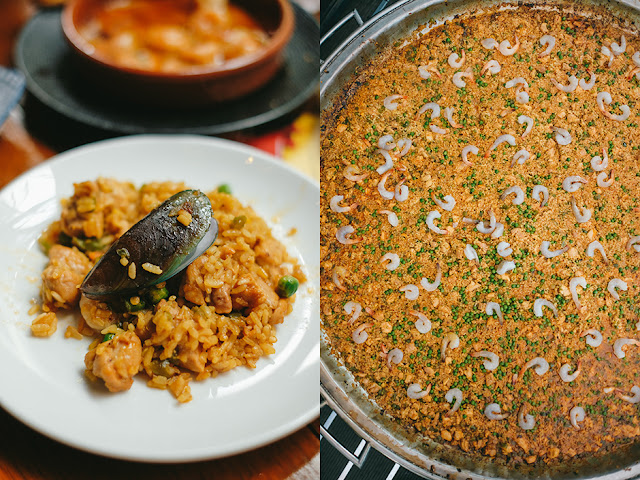 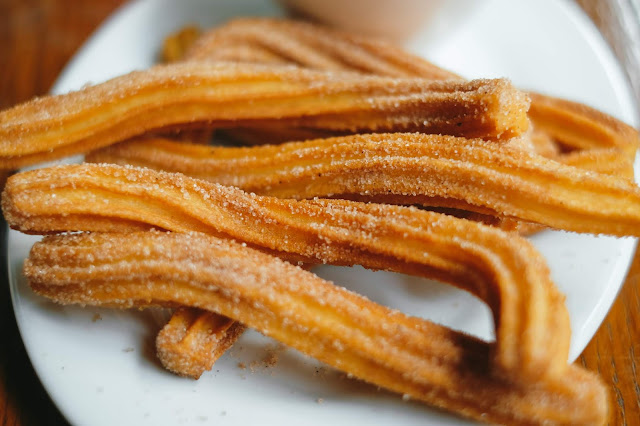 Sweet closure to end the lunch that day and talk about Spanish dessert… CHURROS aka Spanish long fried bread! I absolutely love their churros OMG it has this gorgeous thickness and consistency, not oily (which is important to steal my heart), the chocolate dipping might not be as thick as I imagined but that’s not a big problem for me, the churros alone was among the best ones in Jakarta. Period. 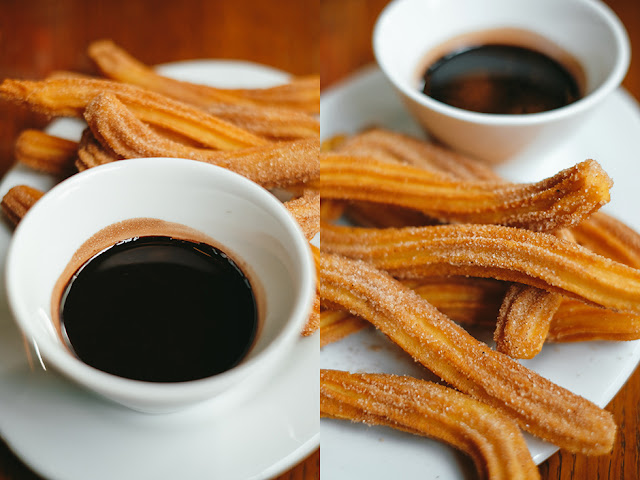 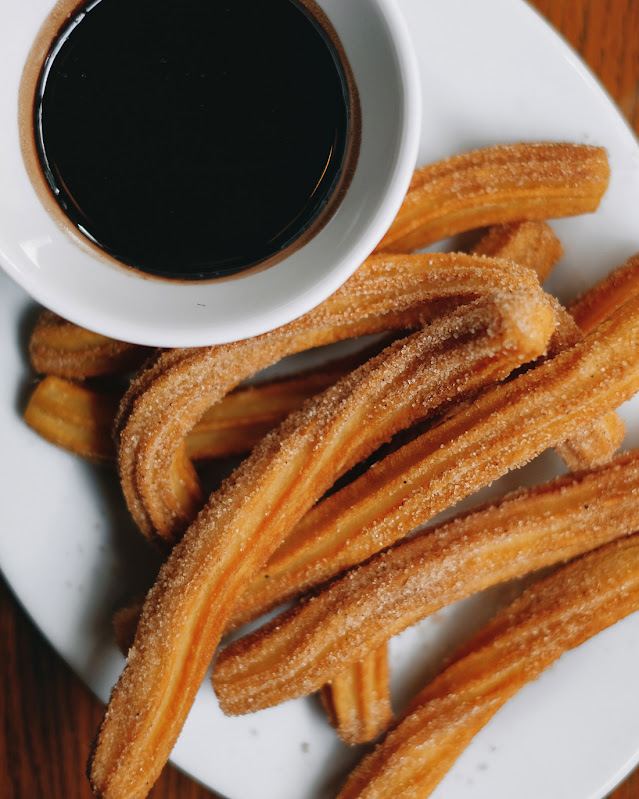 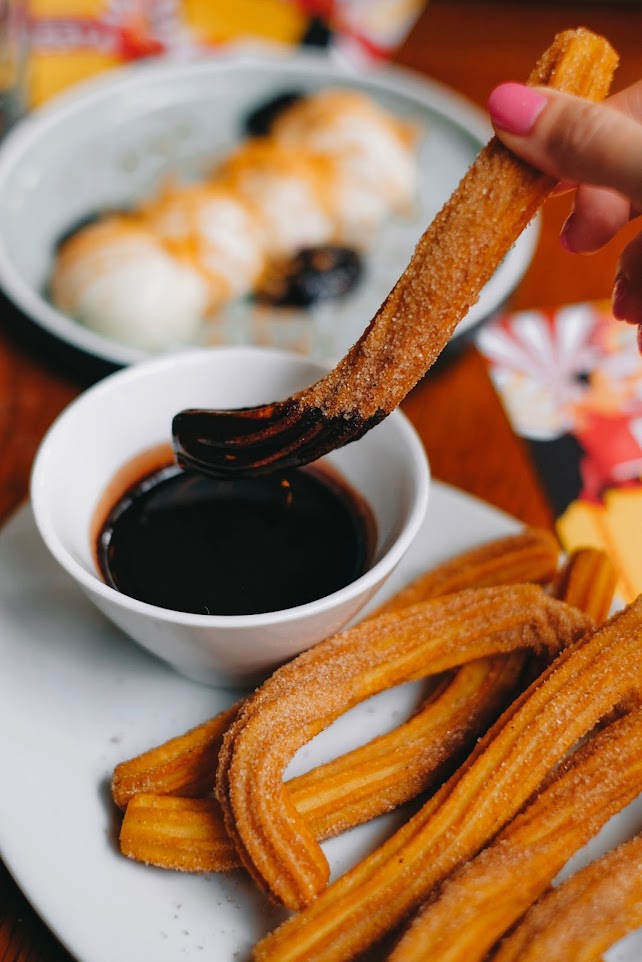 Pampered with food and friends, thank you for having me, last notes: Tapas Club is a serious restaurant (not like expensively serious), AND oh I was surprised by the pricing, it’s just okay for Jakarta’s hip restaurant standard, and they serve good authentic Spanish food! Oh fuck I am thinking about their chicken croquette now okay byeee! 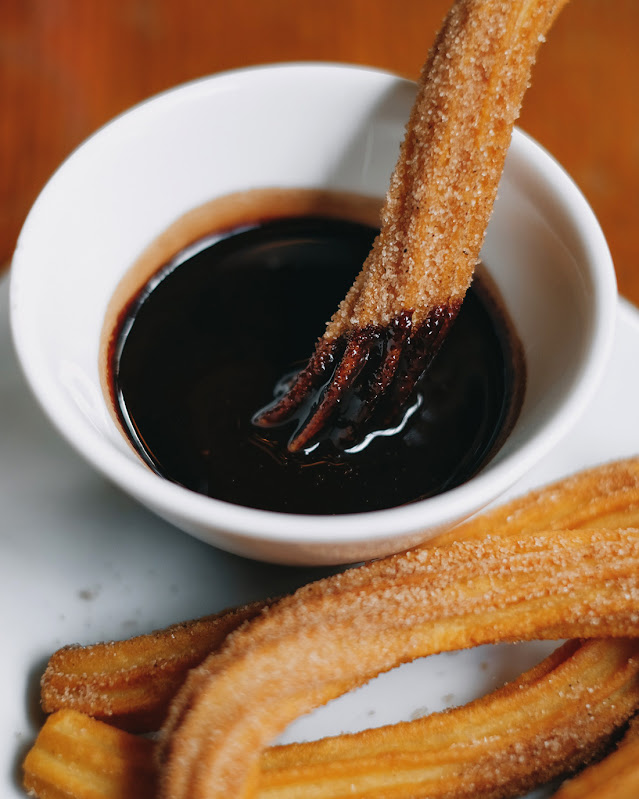 NYAH KUNYAH BY WARUNG MJS: ONE OF THE BEST RICE BOWLS IN TOWN? – eatandtreats

ABOUT US
Newspaper is your news, entertainment, music fashion website. We provide you with the latest breaking news and videos straight from the entertainment industry.
Contact us: contact@yoursite.com
FOLLOW US
© Newspaper WordPress Theme by TagDiv
MORE STORIES
Rekomendasi Cafe